Rogue Creamery’s story begins in 1933 when an industrious entrepreneur from Portland, Oregon worked with the city of Central Point to create Southern Oregon’s first artisan creamery cooperative—the Rogue River Valley Co-op. Their aim was to support local dairy farmers struggling to make ends meet in the height of the Great Depression.

With its fertile soils, ample water, and rolling pastureland, the Rogue Valley proved a very successful location for raising dairy cows and making cheese. Soon, two “cheese giants” took notice, including legendary cheesemaker, Tom Vella. Together with his partner, he transformed the small cooperative into a thriving cheese factory.

In 1935, two of the biggest figures in the cheese world at the time – Gaetano “Tom” Vella and Celso Viviani – formed a partnership to acquire the Rogue River Valley Co-Op. They renamed it the Sonoma Valley Cheese Factory, Plant No. III.

During World War II, the Sonoma Valley Cheese Factory contributed to war efforts at home and abroad. For four consecutive years, the company produced one million pounds of cheddar that was shipped to troops in many countries. Some of the creamery’s  production stayed local, most notably supporting the troops stationed at Camp White in what is now White City, OR.

In the early 1950s, Tom Vella’s partnership with Celso Viviani dissolved, and Tom decided to rename the plant as the Rogue River Valley Creamery. It was at this juncture that Vella began to pursue his dream of expanding his cheese production to include blue cheese.

He travelled to Roquefort, France to learn the art and craft of blue cheese making from the masters, returning home with a coveted blue cheese recipe and the determination to build Roquefort-styled caves for optimal aging. The Creamery’s blue cheese production began in 1953 with the first wheels of Oregon Blue. This was one of the first cave-aged, French-style blue cheeses ever made west of the Missouri River.

Learning from the "Godfather"

Ignazio “Ig” Vella inherited Rogue Creamery from his father, Tom, in 1998. He aimed to restore the glory days of handmade cheese, preaching the value of artisan products and earning himself the title of “The Godfather of Artisan Cheese.”

After more than a decade splitting his time between his two creameries in Central Point and Sonoma, Ig felt it time to sell the Rogue River Valley Creamery after many decades of family ownership. Around this same time, he crossed paths with local entrepreneur David Gremmels – who was looking to source locally-made cheese for a wine bar he had plans to open in Ashland, Oregon. David toured the Creamery one afternoon in 2002, and realized that he and Ig shared a deep respect for the art and tradition of artisan cheesemaking. With the support of a partner, David agreed to purchase the Creamery from the Vella family. The deal was sealed with a handshake on the porch of Vella’s Central Point home that same afternoon.

In 2002, as the new owner, David changed the name of the business to Rogue Creamery. During this time, David developed a close personal relationship with Ig Vella and the Vella family. The veteran cheesemaker remained in close contact with the business, mentoring David and guiding a formal apprenticeship program which graduated the next generation of Rogue Creamery Cheesemakers.

David Gremmels dreamed of creating a new blue cheese that was inspired by the region in which it was made—Oregon’s bountiful Rogue Valley. He took the finest wheels of blue cheese, created from the distinctively sweet and rich cow milk made only in the autumn, and aged them for many months. He then wrapped the wheels in Syrah grape leaves that are picked in the spring and soaked in pear liqueur. The wheels continued to age while absorbing the character of the leaves, and were eventually released for sale nearly a year later around the time of the Autumnal Equinox.

In 2003, Rogue River Blue captured the world’s attention by becoming the first non-European blue cheese ever to win “World’s Best Blue Cheese” and Reserve Champion overall at the prestigious World Cheese Awards in London. This recognition marked the beginning of a new era of fine cheesemaking and innovation at Rogue Creamery.

This honor skyrocketed Rogue Creamery into the spotlight. Rogue River Blue became widely recognized as one of the finest cheeses in the world—winning national and international awards nearly every year since. This recognition also allowed Rogue Creamery to apply for the United States’ first raw-milk cheese export health certificate, paving the path for other American cheesemakers.

In 2006, David and his team debuted Smokey Blue—the world’s first smoked blue cheese. It became an instant success and was recognized with the prestigious SIAL Innovation Award in Paris. Smokey Blue was touted as a product that “shapes what we eat.” 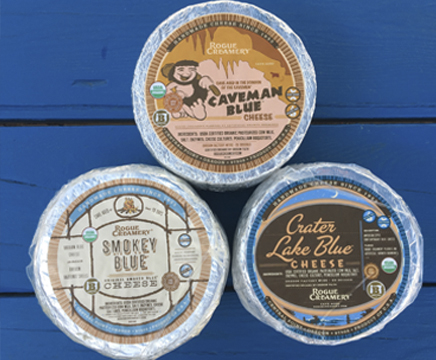 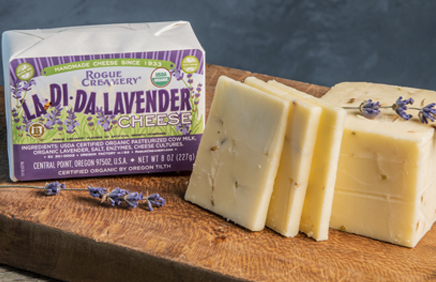 Rogue Creamery continued to innovate, creating new classic blue cheese recipes such as Caveman Blue, Crater Lake Blue, and Bluehorn. The team also expanded their cheddar offerings, introducing Rogue’s Mary, La-Di-Da Lavender, Hopyard, and Chocolate Stout, among others. Throughout the 2000’s and 2010’s, Rogue Creamery cheeses continued to bring home medals and awards in many categories. Rogue River Blue won Best in Show at the USA’s top cheesemaking competition, the American Cheese Society Competition, in 2009 – and then again in 2011.

In 2013, on the recommendation of then secretary of state (and current governor) Kate Brown, David and his team worked to certify Rogue Creamery as Oregon’s first Public Benefit Corporation (“B Corp”). Requiring rigorous independent assessment of a company’s governance policies and its impact on environment, workers, and community, B Corp certification is only awarded to companies that exhibit the highest commitment to service and sustainability.

Rogue Creamery furthered its commitment to sustainability by installing solar panels at both their production facility and dairy. The team developed programs aimed at improving recycling practices and reducing waste. They also created incentives through the “Nellie Green” Program to encourage employees to carpool, use public transportation, bike to work, or use other “green” transportation methods on their daily commute to reduce their carbon footprint.

In 2018, David aligned with Savencia Fromage and Dairy—a French-based cheese business—to further the reach of Rogue Creamery’s handmade cheeses both across the country and around the world. This partnership allows Rogue Creamery to retain its local character and roots, while supporting the company as it continues to grow.

For many years, Rogue Creamery’s mission has been: People Dedicated to Sustainability, Service, and the Art and Tradition of Creating the World’s Finest Handmade Cheese.

It’s not often a business can fulfill its mission – but that’s exactly what Rogue Creamery did in 2019 when its organic Rogue River Blue was crowned World Champion at the World Cheese Awards in Bergamo, Italy. This was the first time an American-made cheese had ever received this top international honor.

In 2020, the Oregon state legislature recognized Rogue Creamery with SCR 204, a measure that officially congratulates the creamery for its “extraordinary achievement” and notes its “distinctive and important place in the history, culture, and economy of southern Oregon.”